The Best and Worst of Everyday Paleo 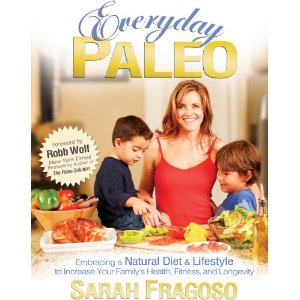 I've had my copy of Everyday Paleo

by Sarah Fragoso for a couple of months now and I've really been enjoying it.  She gives lots of great advice on eating paleo with a family.

One of my favorite features is the exercises you can do with babies and kids. It's simple stuff but seeing it there on the page reminds me that having kids is not an excuse to skip workouts.

It's also full of great recipes. I've had a chance to try about half of them. Some are fantastic but there are a few that have been flops. Here's my opinion of the best and the worst recipes in Everyday Paleo:

1. Chimichurri Sauce- I love this! I've seen other recipes that use oregano instead of cilantro but I think the cilantro is a must! She suggests using it on meat. I think it's really good on my morning eggs.

2. Rockin' Moroccan Chicken- This recipe seemed really weird when I first saw it. Green olives in a stir fry? With cinnamon and raisins? But I have to tell you it was brilliant! It has become a regular dinner at our house.

1. Meaty Pumpkin Souffle- I wanted to love this recipe. The picture looked awesome. It sounded great, but... it was not. I couldn't get my souffle nice and fluffy so it just ended up being pumpkin pie texture on top of the meaty mix. I expected it to still taste good but the flavors just did not work. My husband agreed it was pretty gross.

2. Portobello Mushroom "Sandwich"- This is another recipe I expected to be really good but was disappointed. It was really soggy as all the juice came out of the mushrooms and the mushroom flavor was waaay to strong for me. I had to take the top off and eat it open face to cut down on the mushroom flavor so I could finish it. Also portobellos are really expensive so it just wasn't worth it.

3. Sun-Dried Tomato Chicken Slaw- I thought the flavors in this recipe were too tangy and strong. The sun dried tomatoes and the vinegar together was too much. It was still edible but I won't be fixing it again.


Have you read Everyday Paleo? What did you think? What were your favorite recipes? Your least favorites?

You may also like:
The Danger of Non Stick Pans
Home Birth - My Experience
Want Free Range Eggs? Get Backyard Chickens!
This post has been entered in:
Primal Cave

This post contains affiliate links
Posted by Kara at 6:20 PM

Welcome to The Primal Home! I'm a primal homemaker meaning that we don't eat grains, sugar or processed food. I have three children ages 4, 2 and 5 months. This blog is about real food and natural health.